My family and I took the train to Portland, Oregon a couple weeks ago to visit friends for the long weekend. I didn’t pack for a photo trip, intentionally keeping it light: Fuji X-T1, 18-135mm lens (currently my only lens for the Fuji), and the usual complement of cords and spare batteries that I keep in a little ThinkTank Cable Management 10 bag. On the train ride down, I was texting with my friend Mason Marsh about getting some photographer friends together for coffee when he mentioned that he was going to shoot the sunrise at Pittock Mansion. Would I like to come along? That was a quick “yes.”

Pittock Mansion is owned by the city and sits within Pittock Acres Park. It also rises 1,000 feet above sea level and offers a view East looking over downtown Portland and toward Mount Hood. After we parked in the pre-dawn light, we crossed the grounds to the overlook area to see a nice layer of fog rolling over the city…

…and a lot of photographers already set up. 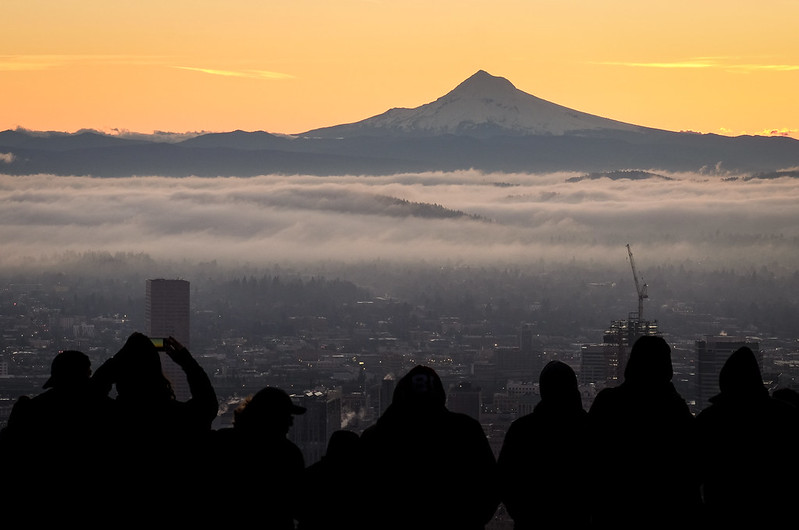 There wasn’t space for us to set up to get the “ideal” angle, but right away Mason said, “Well, there’s the shot,” and set about capturing the entire scene in this wonderful image (click to view it larger):

I headed to the right to seek a new angle. Trees blocked or poked up into most other views, so I changed tack and made the tree branches a major part of the composition. I still wanted to get Mount Hood and the fog into the scene, so I found a spot where the curve of the branches complemented the slope of the mountain in the photo at the top of this post.

Later, I set up on the raised area behind the scrum of folks and concentrated on the mountain and fog as the sun climbed higher. At one point, a shaft of sunlight warmed up the top of the mountain, resulting in one of my favorite shots of the morning.

We read and hear about how it’s important to find a new angle, to discover a fresh take on scenes that have already been well photographed. And then you get to the spot where everyone has stood and think, Yeah, actually, this really is the shot I want. But if it’s a popular location, and if you didn’t get there early enough, that just might not be a possibility.

One of the things I struggle with when on location—and yet ultimately what turns out to be most rewarding—is really working a photo opportunity. Don’t be the person who sets up a tripod on the well-worn patch of dirt where a thousand other tripods have stood, capture the shot, and then head home. By all means, get the trophy shot if you can, but then continue looking for other possibilities.