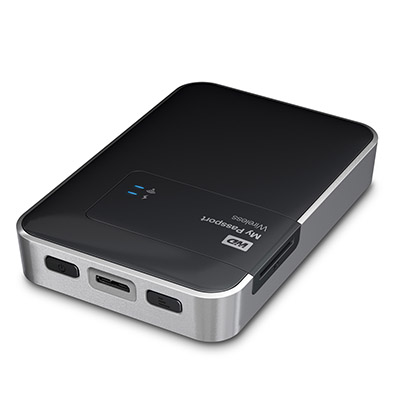 Now this looks interesting. WD has just announced the My Passport Wireless, an external hard drive that features a built-in SD card reader. Available in capacities of 1 TB and 2 TB, the drive includes its own Wi-Fi hotspot that can be connected to an iPad or iPhone using WD’s My Cloud app.

I’ve written about the Seagate Wireless Plus before, which is a wireless hard drive that can connect to an iPad. The benefit of WD’s My Passport Wireless over the Seagate drive is that SD card slot. While you’re on location, dump your photos onto the drive quickly without having to first transfer them to the iPad’s internal storage. Then you can review shots wirelessly, and have a backup, too. I can’t wait to get my hands on one to test.

The drive includes a USB 3.0 connector for transferring files to a computer. It can also stream media and share an Internet connection with up to 8 wirelessly connected devices. WD claims 6 hours of battery life while streaming media and 20 hours of standby time. The 1 TB model is listed at $179.99, while the 2 TB model is priced at $219.99.