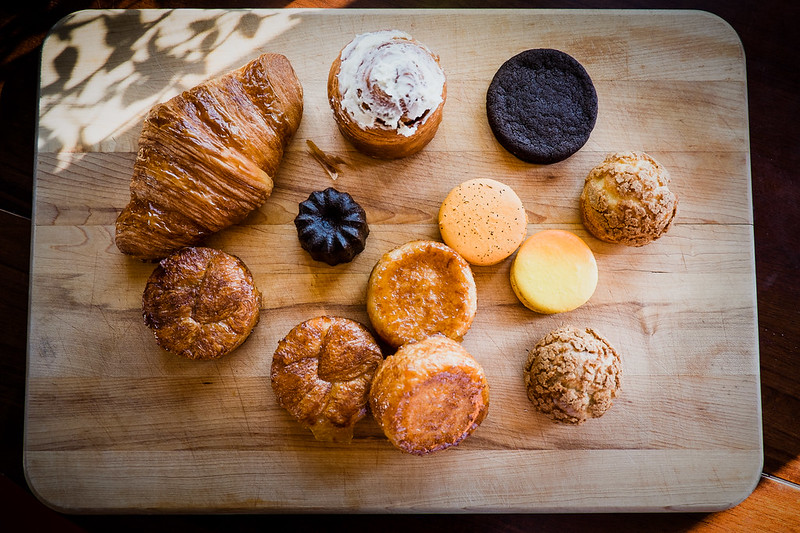 I’m saying it now: no visit to Seattle is complete without going to Crumble & Flake.

This isn’t a new sentiment, but today seals it for me. My daughter and I have been talking about making a trip to Capitol Hill to get some of the brilliant pastries for weeks, and today was a good opportunity to actually do it.

I’ve known Crumble & Flake’s owner, Neil Robertson, for years—since he was one of the foremost practitioners of interactive Web design. At some point Neil decided to pursue his dream of being a pastry chef, went to culinary school, returned to Seattle, worked in a few very good restaurants, and then decided to start his own patisserie. (That’s quite a concise overview of an interesting career path.)

While he was putting it together, he told me about which signature item he’d chosen: the Kouign Amann (pronounced “kween a-mon”). It’s amazing. From the Crumble & Flake Web site: “A specialty of the Brittany region of France, these golden rounds are similar to croissants, but made with salted butter, rolled in sugar, and baked until the outside caramelizes and turns crunchy.” (The photo above includes three of them at the bottom middle, with a chocolate-filled one to their left.)

Today, my daughter and I wanted to buy one of everything, and we did a pretty good job of coming close. (Oh, who am I kidding. We bought samples of only about half of the offerings.) We brought them home to my wife, and then the three of us devoured everything.

A word of warning: get there early. When it first opened, Crumble & Flake would run out of inventory within an hour and a half. I wasn’t able to sample the croissants or the Kouign Amann my first two visits because they were already sold out. The rush has slowed to a respectable pace now. Since today is the start of Daylight Saving Time, the shop wasn’t yet crowded when we arrived shortly after it opened at 9 a.m.

For reference, the items in the photo above are (clockwise from the top): a cinnamon roll, a raspberry chewieo, a coconut-filled cream puff (filled when you order them), an apricot-earl grey macaron, a passionfruit macaron, a chocolate-filled cream puff, three Kouign Amann, a chocolate Kouign Amann, a croissant, and, in the middle, a canelé. The latter looks like chocolate, but it’s not; from the Web site:

A unique pastry from the Bordeaux region of France, these are made from an eggy batter flavored with vanilla and rum. Baked in special little molds for a long time until the outside becomes a dark, mahogany brown and crunchy, while the inside stays moist and custardy.

Seriously, it’s all fantastic and you must go.

And bring me with you.