[Be sure to view it larger in Flickr’s Lightbox interface.]

On a walk today, I spied a backlit leaf that demanded to be photographed. (It’s fall, so this becomes a frequent occurrence.) Although I was carrying my Canon PowerShot G12 in my bag, I of course reached for my iPhone to grab the shot. I upgraded to the iPhone 5s last week largely because of the camera, and this was a good test.

It was windy, so the leaf was whipping around in all directions, making the backlight fleeting. I grabbed the stem of the leaf with my left hand to steady it somewhat, although that really only kept the leaf in frame—it’s not like I suddenly had a still-life studio environment. When I’d positioned it so the light was hitting it reliably, I pressed and held the shutter button in the Camera app. Under iOS 7, doing so activates Burst mode. On the iPhone 5s, that means capturing at 10 frames per second! 20 frames later I lifted my hand. 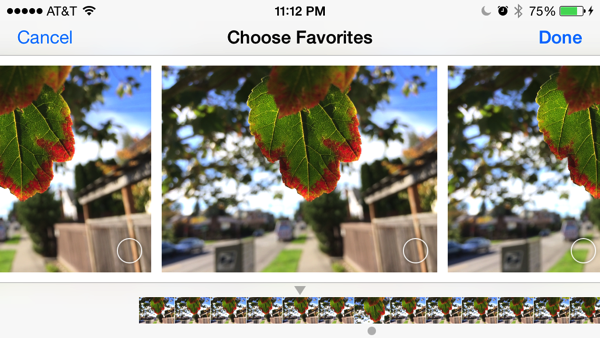 The Photos app stacks the images from the burst and suggests a representative favorite (the gray dot below the thumbnails in the image above; this screenshot was taken after I cropped the photo, which is why it looks different from the others). I looked through the others but ended up accepting the suggested one. (Tip: Pinch outward with two fingers to zoom in on any of the photos being reviewed.)

After I tapped Done, I edited that shot just using the Photos app—not iPhoto or others—so I could crop it and bring more attention to the leaf.

And that’s it. I didn’t make any exposure or color adjustments, and I didn’t apply any sharpening. The detail in the leaf is straight out of the camera.

(Okay, technically the iPhone did apply sharpening after taking the shot. The raw image data captured by the sensor isn’t accessible to outsiders or even apps as far as I know, so what you see is the result of the iPhone’s processor evaluating and adjusting the image, just as you would see with any camera that outputs a JPEG image file.)

I’m pretty darn impressed with the iPhone 5s camera. Apple has put a lot of its attention on the software and processing hardware to create high-quality images without the owner needing to know anything about photography, and it shows.

(If I’d had any sense at the time, I would have also shot slow motion footage of the leaf. Maybe it’ll still be there tomorrow…)