(Or, Why I’m Inordinately Proud of this Book.) 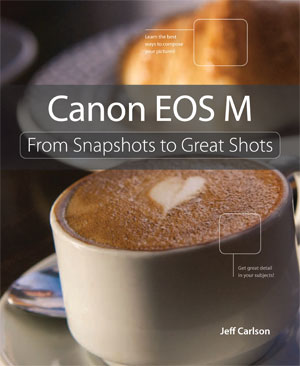 I’m happy to announce that my latest book is now available: Canon EOS M: From Snapshots to Great Shots. Clicking the link takes you to a page listing all of my current books with links to Amazon.com, Barnes & Noble, and Peachpit Press for print and ebooks—whatever your preference.

[Edit: The book is now available everywhere.] (As I write this on March 20, the ebook versions for Kindle and Nook are available; print copies should appear within a week and can be pre-ordered now. And what timing: Peachpit is currently running a March Photo sale where you can get 35% or 45% off the price, depending on how many books you buy.)

Before I talk more about the book itself, I want to share a little story about how it came about and why I’m excited about it:

Late in 2012, I had an interesting phone conversation with a couple of my editors at Peachpit Press. The year before, I’d released my book Canon PowerShot G12: From Snapshots to Great Shots, and Canon had just announced the PowerShot G15. I wondered, would Peachpit be interested in having me update the title?

The original version of that book came about unexpectedly. In 2010, I’d just wrapped up work on a revision of my Adobe Photoshop Elements Visual QuickStart Guide, and I was pretty fried. Ted Waitt called me out of the blue with a proposal: If I’d do a new title about the PowerShot G10 and G11 cameras, it would mean he wouldn’t have to do it himself, which he didn’t have time to do. And they’d pay me money. The timeline was short (of course), but I didn’t have a new project lined up yet, so I said yes.

Here’s a secret: If you really want to learn about something, write a book about it. Even if you know the material—in my case, digital photography—it’s another thing to turn around and teach that knowledge. You’ll gain a deeper knowledge, guaranteed.

The Snapshots to Great Shots series uses a common foundation upon which I built the book, customizing and editing to fit the specific controls and capabilities of the G10 and G12 cameras. The books are also highly visual, with big photo spreads, full color glossy pages, and lots of examples.

Due to the timeline required for the book, there was no way I could shoot everything we needed using the two cameras, so we embarked on an experiment: We crowd-sourced the photos on Flickr. The response was tremendous, with many hobbyists and a few pros contributing shots that could be used. I shot as much as I could, but most of the images in the book were from other contributors. And the photos were awesome—in the “awe-inspiring” sense of the word. The book was a big success, and I revised the book to cover the G12 when it came out the following year.

Back to 2012: I thought the phone call with my editors would be about updating the book again for the G15 (or maybe the G15 and the GX1, an odd hybrid Canon released after the G12), but Peachpit wanted to jump in a slightly different direction and cover the new mirrorless cameras that were hitting the market. Canon had announced its entry, the EOS M and of course, I said yes.

A mirrorless camera takes DSLR-quality photos but, as the name suggests, doesn’t include a mirror between the lens and the image sensor. The mirror in a DSLR lets you see exactly what the camera is seeing when you look through the viewfinder. As you capture a shot, the mirror lifts out of the way and the camera shutter opens to record the light that pours in. Removing the mirror from the design means you don’t have a traditional viewfinder (the LCD on the back of the camera becomes the method for composing a shot), but more importantly, it means the camera can be much smaller than a DSLR. The EOS M is just a little larger than a G12 with a lens attached, which makes it pocketable.

I’ve been amazed at the quality of photos the EOS M can capture. Its low-light performance is impressive, even at high ISOs. You can currently buy the EOS M

in two lens configurations—yes, it has interchangeable lenses, just like a DSLR. For a small profile, get the camera body with a 22mm pancake lens; or, get the body with an 18-55mm image-stabilized telephoto. Both lenses fit only the EOS M. If you want both lenses, buy the body with the 22mm lens and then purchase the Canon EF-M 18-55mm f3.5-5.6 IS STM Compact System Lens

separately. More lenses are rumored to be on the way.

But more intriguing is the Canon EOS M Mount Adapter

, which lets you connect any Canon EF lens to the camera. Already have a lot of good Canon glass? You can use it on the EOS M.

I added a subtitle to this post—”Why I’m Inordinately Proud of this Book”—and here’s why: The crowd-funding approach worked well for the G10, G11, and G12 books due to timing, but that wasn’t an option for this title. So, every photo that appears in the book was shot by me.

In addition to covering the camera’s features, I often felt as if I were putting together a Jeff Carlson coffee table book of photography. I almost think of it as a fine-art book of my photography—that also happens to cover valuable advice and techniques for making great images. (I should add a small disclaimer: Not every photo was captured using the EOS M—populating an entire image-heavy book from scratch would be impossible unless I had a lot more time and a much bigger budget to live on during that time. The publisher needs to release the book as close to when the camera appears on the market, including printing and distribution time. Such is the reality of the publishing business. Still, every shot could have been captured with the EOS M.)

I received my first author copy of the book this week, and I really like how it turned out. I owe a lot of gratitude to Susan Rimerman, Lisa Brazieal, and Nancy Pederson at Peachpit for making it a reality. The print quality is great, and the images pop nicely.

As for the rest of the book’s content, consider it a portable photography classroom with a focus on the EOS M. You’ll learn about various types of photo situations—there are chapters on shooting portraits, landscapes, action scenes, and subjects in dark situations—and how to specifically use the EOS M to capture them. You won’t find a boring walkthrough of the camera’s knobs and menus, but a tour of what’s important and how to get the types of photos you’ll want to capture in real life.

If you own an EOS M, I think you’ll enjoy the book. Download a sample chapter (PDF) (which also includes the Table of Contents, introduction, and index) to give you an idea of what the book is like. (And if you’re thinking of buying an EOS M but haven’t yet done so, please consider using the links above, which help support me and this site. Thanks!)

Lastly, if you buy the book and like it, please write a review at Amazon or Barnes & Noble. Happy shooting!