Here’s something a long time coming. I’m thrilled to announce that I have a new guide at The Wirecutter: The Best 360-Degree Camera.

This is by far one of the most interesting projects I’ve done. 360-degree cameras capture the entire sphere around the photographer, in stills or video, which is great for getting a better sense of a scene beyond what a typical photo frame offers. But this photography also has many challenges, such as where you the photographer appears—many of us are happy to hide behind the camera, but in this case there is no “behind” the camera.

It was also a challenge to set parameters, because the cameras we chose for final testing take different approaches to the task of capturing a 360-degree scene. They’re not like most cameras where a lot of the features are the same from model to model and you look to see which one has better resolution or low-light capabilities. For example, the Ricoh Theta S, Nikon KeyMission 360, and Samsung Gear 360 each use two extreme–wide-angle lenses to capture two images, which are then stitched together in the camera as one image. However, the 360fly 4K designers opted to use just one lens to avoid the stitching altogether, which unfortunately means you end up with dead area in the image where the lens can’t see.

When viewed in the cameras’ apps or in a few locations online such as Facebook, Flickr, or YouTube, you can explore the entire scene by dragging the image. If you’re on a mobile device, some sites like Facebook enable you to turn your body and move the device to view everything. It’s a very cool effect! (The image below is hosted at Flickr and should be interactive. You can also see a few more at this Flickr album.) 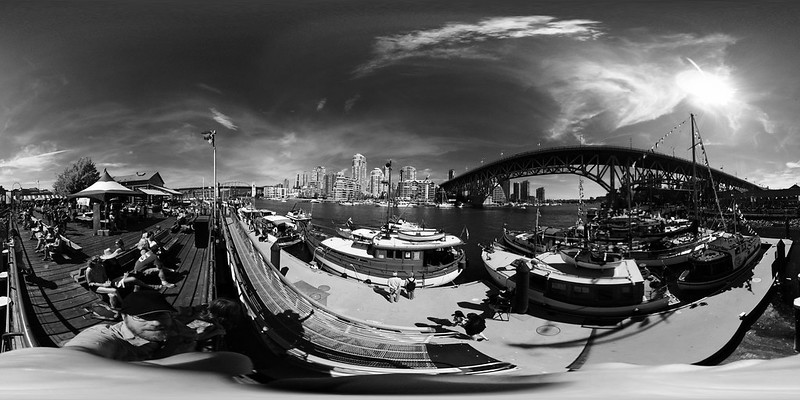 In the end, it wasn’t just image resolution or form factor that made one rise above the others, but a combination of hardware, software, and experience to capture the images, and then the process of doing something with the files (which has its own complexities). I’ll let you read the guide to see which one was the winner. I was surprised, and I was the one doing the research!

360-degree photography is really in its early days, and I think this category will get even more interesting in the near future as customers decide what to do with the cameras and manufacturers cater to those whims. In the meantime, the shots you get can really stand apart from traditional cameras in many ways.