I’m excited to announce that Take Control Books has just published my update to Apple Watch: A Take Control Crash Course. Version 1.2 is now fully updated to cover watchOS 2 and the various improvements rolled into the watch’s operating system (see below).

Although the book required a fairly substantial refresh, we’re offering it as a free update for current owners: click the Ebook Extras button on the cover to view the title on the Web and download the updated version in the column at left.

If you don’t yet own it, the book is just $10. When you buy it, you get PDF, EPUB, and Mobi (Kindle) versions so you can read it on any electronic device you own. 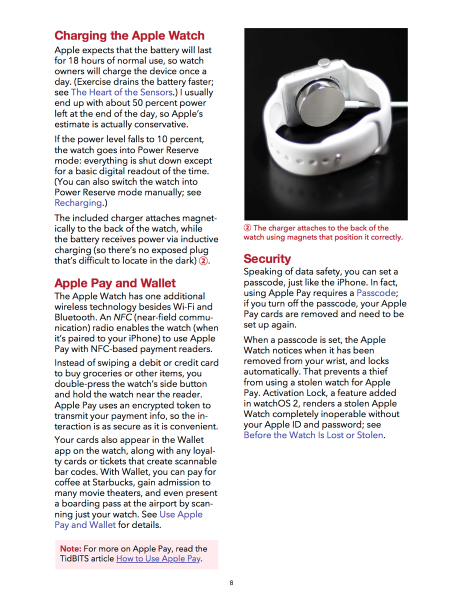 And here’s a little behind-the-scenes fun: When we published the 1.0 version of the book, the Apple Watch had only been announced, which meant I had to use screenshots from Apple’s Web site and from video of the introduction event in sections of the book. Because of that, Apple rejected the title when we submitted it to the iBooks Store. In this new edition, I’ve removed all of those images and recreated new ones in their places, such as the photos in the example pages above. There’s nothing like convincing your wonderful but very sleepy wife to pretend she’s going out for a jog at 11:00 PM and turn your living room into an impromptu photo studio.

I hope you enjoy this update. I wear my Apple Watch every day and find it extremely useful, and I’m eager to share my enthusiasm.

The Apple Watch has received its first major software update, watchOS 2, with improvements in many areas. I’ve updated the book to include new information: