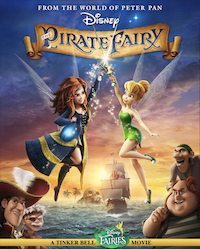 My daughter is wonderfully imaginative, and for a long time she’s enjoyed stories about fairies. She builds fairy houses out of twigs and leaves, makes up her own stories, and also likes the Disney Fairies stories and movies. We recently watched The Pirate Fairy

on Netflix, and it kindled a question I had about fairy flying. So, in the car today while we were talking about fairies in general, I asked her about it:

“Fairies have wings,” I said, “but they can’t fly when their wings are wet. But they also can’t fly if they don’t have pixie dust. The pixie dust can make anyone fly. So why do they even have wings, if they can’t use them to fly at any time?”

She thought about this for a minute, and then returned with a fabulously inventive, internally consistent answer.

“Well, you see, Dad, their wings are always wet, and the pixie dust dries the wings off enough so they can fly.”

I never would have come up with that.

I love my daughter’s brain.