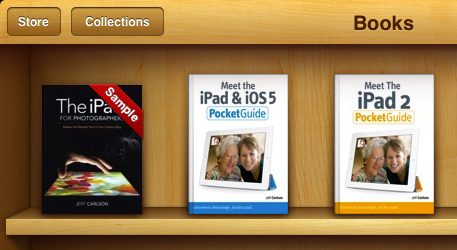 I received an unexpected email today from a reader who bought the Kindle edition of the book, wanted to compliment me on the book, and ask a question. I was quite stunned, as I didn’t think the ebook versions would be released until the print edition appeared toward the end of March. But there it is, available on Kindle, iBookstore, and Nook! (See “Buy the Book!” for links.)

If you’ve already purchased the ebook, thank you! However, a few things aren’t quite ready behind the curtain. For one, this Web site existed only as a domain name acquisition until this morning, so as you can see, content is sparse for now.

What isn’t mentioned (yet?) on the online storefronts is that an addendum is coming that covers the new iPhoto for iOS app that was announced along with the third-generation iPad. I turned in my final files the week before Apple’s announcement, fingers crossed that the new device wouldn’t make sections of the book outdated. Fortunately, except for iPhoto, everything in the book still applies to the new iPad. (Due to print obligations, we couldn’t push the due date out any further. Besides, that would have likely delayed the book by a month, and this baby wants to get out into the world!)

I’m working on the addendum now (which includes coverage of Adobe Photoshop Touch for iPad, which also shipped too late to include it in the print edition) and hope to have it to Peachpit in the next couple of days. It will be a free download, but you’ll need to register your book at Peachpit’s site to get it; that page, at peachpit.com/ipadupdate, isn’t set up yet.

Another consequence of the early electronic release is that most of Chapter 3, which covers organizing and tagging photos on the iPad, doesn’t make a lot of sense because the software it details, Photosmith 2.0, isn’t quite out of beta. When I learned about the major revamp between versions 1.0 and 2.0, I nearly begged the developers for access to pre-release versions for the book. I suspect the software will be available at or soon after the print book arrives; until then, read Chapter 3 and dream of what soon will be.

Lastly, in the middle of all this, Apple’s release of the third-generation iPad means I’m frantically updating my iPad Pocket Guide to get it to market as soon as possible. (It’s not even in the stores’  systems yet, but believe me, Peachpit and Barnes & Noble want the book now.)

So, for those of you already buying the ebook, thank you again! I encourage you to write reviews wherever you bought it if you feel so inclined, and feel free to post comments here or email me at ipadforphotogs@necoffee.com with feedback.